German designer Martina Balke created the font Stempel™ in 2002. The Stempel family consists of two fonts; each made to look like a set of block stamps. Each letter appears inside its own roughly drawn square. Stempel One’s letters are very simple form/counterform objects. Stempel Two’s forms are more ornate: each square stamp has a thin border inside of it, and then the individual letterforms have been knocked-out, so that the colored area depicts the counters around the letters rather than the letters themselves. As a line of text is typed, a box appears for each letter entered, and all of the boxes slightly nudge against each other to form the line.
The Stempel fonts have the appearance of a hand-made quality to them. Their forms appear too random, too delicate, and too thought out to have been made on a machine. Using these fonts will add a nice warm, linoleum-cut touch to your work. 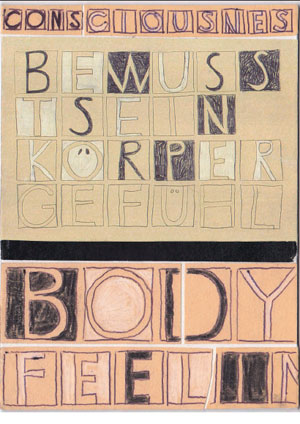 Card „Bewußtsein”, designed by Martina Balke. Preliminary design of Stempel One and Two.
The Know How section offers detailed background knowledge to deal with all enquiries about the use of fonts.