Linotype Univers® Next is a completey reworked version of the original Univers typeface family designed by Adrian Frutiger forty years ago. It includes 59 regular spaced weights and four monospaced Typewriter weights. All fonts are available with at least a Latin Extended character set (so called “Pro”). 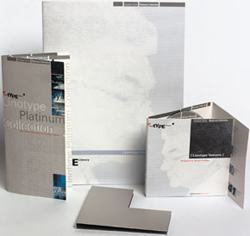 Hand drawings for the new Univers® by Adrian Frutiger

Every font is defined by a three digit number. The first digit (A) defines the weight, the second digit (B) the width and the last digit (C) the position