Quality is often visible only on second glance. Subtle changes to certain letters, only noticeable when enlarged – such as refinements of the proportions in the stroke weights, or a slight taper in the exit strokes, or alterations in the curves – lend Linotype Univers a contemporary character and contribute to a homogenous form.

Single characters are most noticeably different in the condensed weights. The curves of the vertical strokes are extremely prominent. These new typefaces share very little in common with the old Univers® condensed, but fit in far better with the form 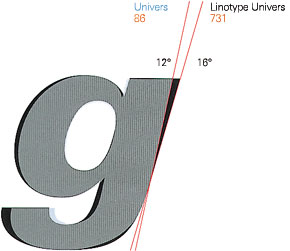 The italic weights, following the original Univers® design, slope once again at 16° instead of at 12°. Every character was reworked individually, and the character widths were adjusted optically for a better fit 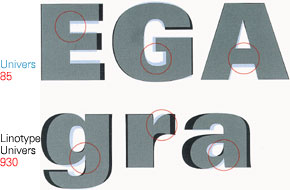