For over 40 years, Univers has remained one of the most used sanserifs. It binds the rational and economic elements of typography with a timeless elegance and modern grace. Its systematic construction and almost unlimited applications made Univers a success in all corners of the world.

Due to the translation of typefaces from hot-metal setting to phototype, and shortly thereafter to digital typesetting, many new Univers families, some of which differed considerably from the original, appeared on the market. These circumstances forced Linotype to not only rework the classic typeface, but also to redesign it completely, based on the original concept. Out of close collaboration with Adrian Frutiger arose a modern Univers which hearkens back to the qualities of the original design.

What is really new in Linotype Univers? During its development, there were essentially two goals. First, the expansion and refinement of the system from 27 to 63 weights, including careful tuning of the character widths in relation to each other. Second, all of the weights were completely redrawn, with careful attention paid to making the proportions more consistent with each other and improving fine details. In particular, the bold and condensed weights were reworked for improved legibility and on-screen application. Also important was working out the stroke weights. By following Frutiger’s original designs, the humanist character of the sanserif Univers now comes through more distinctly.

Linotype Univers is a modern typeface whose esthetic and technological perfection make it a milestone in typographic history.

more ... The Family Stays Together

Univers was the first typeface whose systematic construction was developed consistently and intentionally from the very beginning: the combinatin of different weights and widths allowed extensive applications from one casting 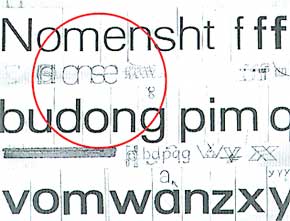 The design of the new Univers is based on Adrian Frutigers original drawings from the 1950s. They also demonstrate the chain reaction principle based on this typeface