Sketches for Optima® were first done on a 1000 Lire banknote in 1950. Not having any paper to make sketches of inscriptions in Santa Croce in florence, Hermann Zapf used a banknote. In 1952 the first drawings were finished after careful legibility tests for a typeface. The type was cut by the famous punchcutter August Rosenberger at the D. Stempel AG typefoundry in Frankfurt and produced also in matrices for the Linotype typesetting machines. Unfortunately no real Italic was manufactured, but only an oblique version of the roman.
The basic idea of Optima® was to develop a typeface between a sans-serif like Futura® and a classical Roman like Bodoni, To avoid the monotony of the straight lines of an ordinary Sans-serif the stems have slightly curved out lines, typical for all Optima alphabets. This makes the elegance for the various Optima designs. After 50 years since the beginning of Optima a complete redesign was made named Optima nova in producing digital alphabets without technical compromises.
The careful work of the new designs was done in close collaboration of Hermann Zapf with the Japanese type designer and computer expert Akira Kobayashi from Tokyo. All Optima alphabets were new shaped and additional weights had been added, like Optima nova Titling, capital letters with special and unusual letter combinations and ligatures. Optima nova Titling is a welcome font for headlines, logos and advertising purposes.

Optima nova is available for Macintosh and PC on a CD for both platforms. All weights contain an integrated Euro symbol. 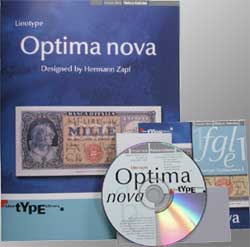 The first sketches for Optima on a 1000 Lire banknote.

Available is an online brochure on Optima nova that you can read directly from your screen.