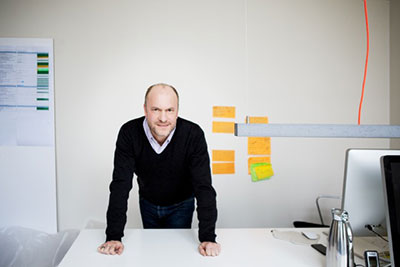 Interview with Helmut Ness on the publication
of Vialog 1450

How did you discover your passion for font design?
During my studies in Wiesbaden, I was fascinated with my professor, Werner Schneider and the enthusiasm for the formal language of letters and their sequences. During my first stay in Berlin, I experienced typeface development on a deeper level, spending time with designers like Henning Krause with his office formgebung, Erik Spiekermann (MetaDesign) and my first work for FontShop.

How many fonts have you designed up to this point?
Four families, a few corporate and headline fonts like Russisch Brot, for example, along with my fellow student Markus Remscheid.

Is font design your main focus? What do you do besides design fonts?
My current focus comes from jobs from the company Fuenfwerken, the development of user experience and innovations combined with brand development and design. However, fonts still play a role in making these consistent brand experiences recognizable.

Were you influenced by other fonts during the design process?
Because of the close collaboration with Werner Schneider – but also from the time with Henning Krause in Berlin – design by hand and technical drafting played equal roles for me. Adrian Frutiger’s open, but unstructured Frutiger on the one hand and the open and yet narrow fonts from Holland (the Gerrit Noordzij school in The Hague) were influences for me. Not to mention the ideas of Erik Spiekermann and Luc(as) de Groot.

What technology did you use when making Vialog 1450 and what did the design process look like?
The definition phase took place on paper, as always. The testing of prototypical character forms and font patterns takes place exclusively via import into AI and then using Georg Seifert’s Glyphs. I no longer use Fontographer and Frontlab. For hand lettering projects I also like to use the iPad Pro and iFontMaker. But I also use Glyphs to refine them.

How would you describe the style of your font?
A narrow and now, according to DIN 1450, normal width sans serif with a humanist character. A focus of the design was always the “grip” in favor of legibility.

For which applications (poster, text, newspapers, advertising, etc.) would you recommend Vialog 1450?
The presentation of information, where uniqueness is required. For example: Guidance and orientation systems, like the highway signs in Japan or the passenger information in the subway in Munich.

What are the unique details that characterize Vialog 1450, in your opinion?
The distinctiveness of letters like “il” due to the unique shape of the “i”. This was decisive for the use of Vialog in Japan.

Is there anything that you would like to tell the graphic design community about Vialog 1450?
My goal would be – if there were time between family and Fuenfwerken – to expand Vialog specifically for the design of digital experiences, so that the font could have even more diverse application as a corporate font.
The Know How section offers detailed background knowledge to deal with all enquiries about the use of fonts.