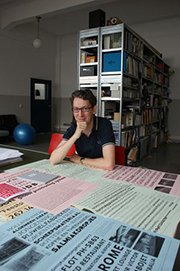 Flyers, Intros from James Bond films and PlayStation games as well as the typeface Senator from Zuzane Licko inspired Paul van der Laan to create Linotype Rezident. To its design, van der Laan says, "I was designing a business card for a friend and I had a certain mood in mind for the typography. I tried to capture this mood in a couple of sketches, drew a few characters directly onscreen and just expanded them into a typeface." And so began Linotype Rezident, with its cool, technical and constructivist appearance which brings to mind computers and virtual reality. And the name? " The name of the font comes from the game Resident Evil. One of the main characters in the game is called Leon and the typeface was initially drawn for a friend of mine called Leon. It also refers to the city of The Hague – where I live and got my education – since it’s often called ’de residentie’", where the queen and parliament of The Netherlands are seated.

Please take a look at the personal designer portrait of Paul van der Laan.
The Know How section offers detailed background knowledge to deal with all enquiries about the use of fonts.