And now a few notes about my experience in the movie business. The film "The Art of Hermann Zapf" was produced in 1967 at Hallmark Cards Inc. in Kansas City, Missouri and in my design studio in Dreieichenhain, Germany. There was also a German version made by Linotype with the title "Die Welt der Buchstaben". This has for several years been the name of my permanent exhibition at the Herzog August Bibliothek in Wolfenbüttel, a beautiful old library, famous for their manuscripts and books.
It was the idea of Hallmark to make an educational film to be lent to art schools and TV stations. The beginning of this interesting project was very difficult. I was not at all familiar with the Hollywood English of the movie people, so I had to learn that first. Our cameraman, Frank Robinson by name, came from Hawaii. He was used to big outdoor scenes with professional models. He spoke in his Polynesian accent only of shooting and takes in connection with my story board, of stills he wanted to include, etc., demonstrating his ideas with sweeping gestures.

My God, very quickly I realized we had absolutely different conceptions about the film. I wanted no outdoor shootings at all, no expensive movie stars. I wanted to show only single letters, my paw manipulating a broad-edged pen, and for the letterforms, close-ups to explain the movement of the pen. In addition, I wanted special close-ups through a glass on which I would write. Turning the film during copying will make it look like as though I was writing on air. At once my friends at Hallmark had a new term for this: frog views. How could I tell my thoughts to a wild man from the film business? But the frog view idea persuaded him and suddenly he said: Great, Hermann, let’s start tomorrow.

I would like to add just one detail of the making of the film. After long discussions and the help of a lot of alcohol we started late in the night. I was sitting at a slanted glass table with a hot spotlight in my neck. Frank Robinson was lying on the floor with the camera ready for a frog-view shot. My task was to write beautiful letters with ink which dried as soon the pen touched the slippery surface of an astralon sheet. Not an easy job at all with a nervous cameraman at your feet. But with whiskey and many words of praise at the end, we all finished the film. It was a painful experience and I swore never to burn my fingers as a pseudo Hollywood production manager, but to stay with my humble pen and design alphabets. 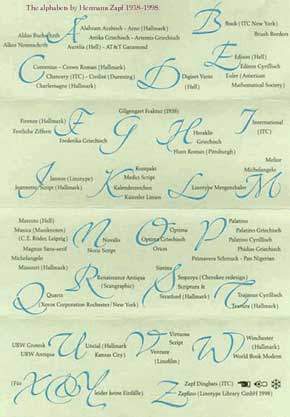