Linotype Compatil® is the first comprehensive type system which enables all typographical elements to be used to full effect in order to reproduce the message conveyed by text information. Four different type styles with a total of 16 weights have been merged into a unique typographical network. There are now no limits to the font user’s creativity.
The system is a product of technical innovation and constitutes a new design approach which meets the highest aesthetic standards.
For almost 2 years, a team of experts from Linotype has been working with initiator Professor Olaf Leu under the direction of Silja Bilz and Professor Reinhard Haus to create the Linotype Compatil font system.

Despite the Internet and TV, it is essential today to be able to absorb information quickly by being able to read it with ease – a fact that is becoming increasingly important both on-screen and on paper. It is the role of the font to increase legibility and to ensure typographically perfect results for text design work.

The new Compatil type system meets all these needs.
The transition from an information society to a knowledge-based one is well underway. The explosive growth in information is also being accompanied by an increase in the amount we read. Magazines that are several hundred pages thick, reams of documentation, news services and newspapers, millions of new websites and billions of new e-mails and files exchanged daily – all these mean that we as readers have to be able to garner the information we need quickly and thoroughly and must be able to communicate efficiently.

Ease of reading is therefore the first priority for designers and typographers. At the same time, texts and layouts must not become bland, each a mere copy of the other. How is it possible though to combine a diversity of creative design with the need to reduce text matter to the absolutely essential? The concept that the Linotype Compatil font system is based on provides an answer – "unity through diversity". This means that the variety of styles and possibilities for combining the 16 font weights guarantee a harmonized, easy-to-read text.

The Linotype Compatil type system uses typographic finesse to guide the reader’s eye and ensure that information can be absorbed quickly and easily. 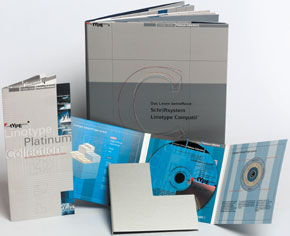