Supports up to 17 OpenType features.

The new DIN Next Slab: Now even more design possibilities with the popular DIN Next
With its technical and neutral character, DIN Next™ has earned a permanent place in contemporary typography. Now, DIN Next Slab expands the font family further, offering new design potential.
The original shapes of the DIN typeface originated about 100 years ago, at the beginning of the 20th century. They were first used for locomotives and, a bit later, for signs in train stations. Designed by engineers, the DIN typeface is, above all, easily reproduced mechanically. In 1936, the font – available in only two styles (condensed and normal) – became a standard for the Deutsches Institut für Normung e.V. (DIN - “German Institute for Standardization”). To this day it is used on traffic signs, such as the German highways. Designers also like the technical and formal font, however, and have been using the DIN fonts for their designs increasingly in recent decades. To free the DIN typeface of its numerous typographic shortcomings and provide it with suitable features for graphic applications, DIN Next was created in 2009 under the direction of Akira Kobayashi at Linotype. There are now seven weights, italic styles, small capitals and medieval characters.
More … 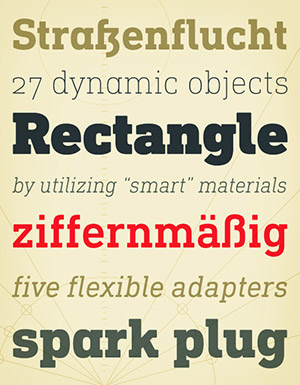 14 Typefaces available in:
Show all

DIN is a trademark of Monotype GmbH registered in the U.S. Patent and Trademark Office and may be registered in certain other jurisdictions.