The favorite fonts of the designer Mårten Thavenius 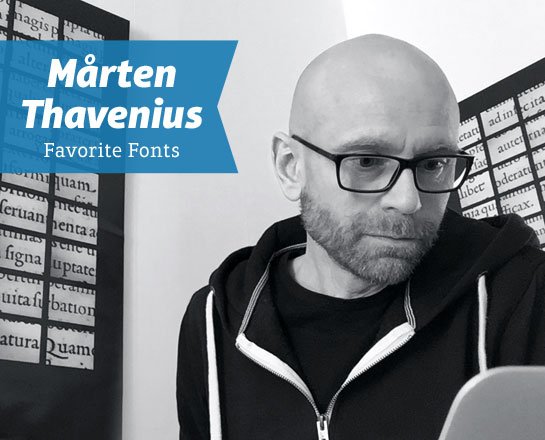 After completing his B.A. in Philosophy and Asthetics, Mårten Thavenius began working as an interface designer for IBM and later as an independent web consultant and font developer. The comprehensive families Aptifer® Sans and Aptifer® Slab are the best-known font designs from the Swede.
In the following, you’ll learn about some of Mårten Thavenius’ favorite fonts, which the designer has put together exclusively for Linotype.com. He also provides tips for their application.

Veronika Burian has made a lot of great typefaces. Try out her Maiola for the next novel you set. You might want to use the Book weight if your paper doesn’t bleed too much.
(Inspired by the early Czech typography, Maiola by Veronika Burian is a modern typeface, despite its historical heritage. The striking, in some cases slightly angular forms recall a fountain pen, but the letters are designed in such a restrained manner that they do not disturb the legibility and usability.) 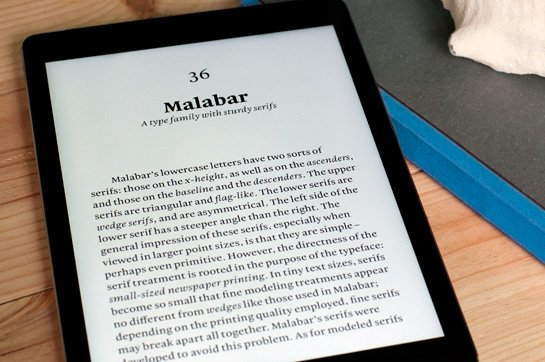 Although its many influences from the 16th century‚ Dan Reynolds’ Malabar has a large x-height‚ loose fitting and lack of fragile details which gives it the stability required for for e-books and the Web. It has a newspaper feeling to it and it is like strong coffee in the morning.
(With the Regular, Bold and Heavy weights, Malabar® covers countless application scenarios and is also available as a Web font.)

Nadine Chahine’s Zapfino Arabic – made with Hermann Zapf’s approval – makes the Zapfino family an interesting meeting place between the Arabic and Latin scripts. The way Nadine worked with drafts posted in social media for review obviously turned out to be of essential value for the final result.
(Zapfino® Arabic is an evolution of the Arab writing tradition and combines the Naskh and Nastaliq styles in a backwards-inclined typeface that has the look of a handwritten font. The proportions of the characters correspond to those of traditional manuscripts in Naskh, but the separate forms and line ends bring an accented, almost ornamented sense of movement to the typeface, which is in turn inspired by the extravagant ascenders and descenders of Zapfino.)

When designers and branding folks ask me for advice about which gothic to use‚ Benton Sans is often among those I mention. It is well balanced and still has a lot of Morris Fuller Benton characteristics in it. This massive family contains a full artillery of styles to select from.
(Starting with the original drawings of News Gothic™ by Morris Fuller Benton from 1903, Tobias Frere-Jones began a redesign of the neutral and very legible sans serif. Cyrus Highsmith completed the work. The result, Benton Sans, is a very well-equipped remake of News Gothic, which was very popular in the 20th century. Benton Sans has nine weights in four widths, each with a matching italic.)

Gerard Unger’s Swift has been a workhorse for newspaper body copy for a long time. A nice surprise‚ especially with the latest reworked version Neue Swift‚ is that it works very well for body copy on the web as well. And as always with Web typography‚ be kind to the user and set the text in large sizes – you don’t have to pay for the paper anymore.
(Pyramid-shaped, tapered serifs are one of the most characteristic features of Swift by Gerard Unger. A large X-height and very solid letter shapes ensure that the typeface survives the challenging conditions of newspaper printing. Although designed for newspapers, Swift’s distinctive forms have made it a favourite for corporate fonts.)

Trilby is a mind-blowing and well executed design by David Jonathan Ross. It uses a reversed stress which is uncommon in Latin type‚ but it is still very well balanced. Also be sure to check out Nina Stössinger’s upcoming reversed stress typeface Nordvest when it is out‚ the italics are amazing.
(With Trilby, David Jonathan Ross picks up the style of the French Clarendon® and its typical, inverted contrast in weights. He liberated the font from unnecessary ornamentation, thus creating a modern interpretation of this timeless style.)
Afficher plus
Masquer