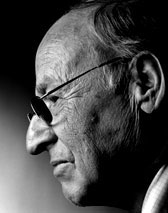 Olaf Leu
Olaf Leu was born in Chemnitz in 1936. He apprenticed as a typesetter and typographic designer in the art department of the Bauer type foundry. Later, he worked as the assistant to the creative director at the Hanns W. Brose advertising agency in Frankfurt am Main.

In 1959, he began his career as a freelance graphic designer and art director. In 1971, he founded the studio “Olaf Leu Design” in Frankfurt am Main, which became known as “Olaf Leu Design und Partner” in 1976. The studio remained in operation until 1991. Since that time, he has devoted himself to design journalism and teaching.