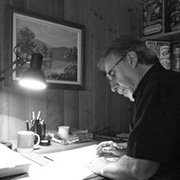 Keith Morris
Keith Morris was born in Sydney, Australia. In 1961, he began his first job in commercial advertising, which increased his interest in typefaces and letters. In addition to his work, he spent a lot of time in the Mitchell Library to find out more about commercial fonts and typesetting. His perpetual interest led to a meeting with the lettering artist Bruce Bennets. This encounter inspired Morris and he began to develop his career in the field of graphic design. Keith Morris changed his jobs to further his development. He ended up as a senior designer at Graphic Concept, one of the leading design agencies in Sydney. His career led him to the position of creative director. He also published numerous works and received awards. In recent years, his work has focused primarily on fonts and font designs, logos and branding with clients in Australia, Asia, Europe, United States and England.
Afficher plus
Masquer

Morris Freestyle is a trademark of Keith Morris and may be registered in certain jurisdictions.