Linotype classic Palatino in modern versions for print and Web

Palatino is one of a very few designs that yielded fonts in every major type technology, starting with hand-set foundry type in 1950, adapted to Linotype’s mechanized line-casting equipment soon thereafter, and on through various revolutions of photo-set and digital type. While Hermann Zapf was already an accomplished calligrapher and draftsman, Palatino’s release came at essentially the start of his career as a type designer. The face quickly gained prominence with the help of high-profile publications such as the Gutenberg Yearbook published in Mainz, and in America, Standard Oil’s annual report. Hundreds of American newspapers followed. 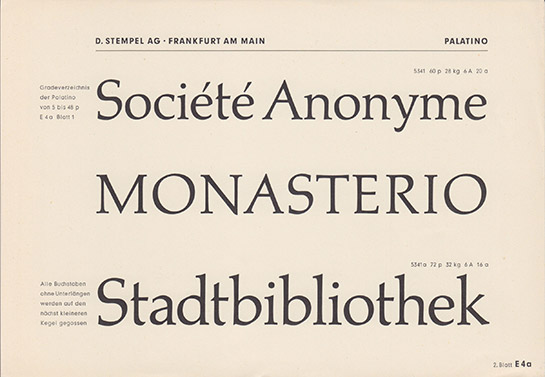 Palatino’s display cuts shown in D. Stempel AG catalog, 1973 The design takes the name of writing master Giambattista Palatino and draws from Italian Renaissance forms. But the pragmatism of its economical fit and the natural warmth of its personality is attributable alone to Zapf. Whatever ideas that led to Palatino taking the form it did would become a well to which Hermann Zapf would return again and again. Such results include the slightly lighter-drawn Aldus, titling cuts Michelangelo, Sistina and Saphir, the quite heavy Kompakt, and the connected script Virtuosa.
Aldus nova, a reissue of the original Aldus, is the text version of Palatino and designed specifically for long reading texts like books and magazines. With its open counters and harmonious, classical proportions, it is perfect for use in small sizes and is practically the predecessor version of Palatino eText.

In 2005, Akira Kobayashi, type director at Monotype, partnered with Zapf to revisit some of these designs, later released by Linotype under the name Palatino nova. A sans complement was also developed, Palatino Sans and its more casual variant, Palatino Sans Informal.

Palatino nova provides the typographer with all that’s required to create complex hierarchies and produce sophisticated typography, including small caps, multiple figure sets including old-style and lining figures in proportional and tabular widths, fractionals, and sub- and superscripts, ligatures, alternates, and a few dingbats. The series comes in a range of weights and titling cuts.

A more robust version for screen reading, Palatino eText, was developed by Toshi Omagari in 2013, and additionally supports Greek and Cyrillic-based languages. 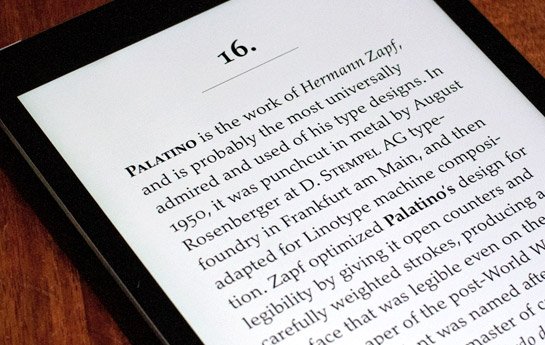 An Arabic version of Palatino, drawn by Nadine Chahine also extends the range of this great standard.