In spite of his youth, Tschichold was accepted in the typography class of Professor Hermann Delitsch in Leipzig in the spring of 1919. He also learned engraving, copperplate, woodcutting, wood engraving and book binding. He was Delitsch’s favorite student right from the beginning. The professor often said that there was not anything he could teach that Tschichold did not already know and gave his student free rein. In 1921, when he was just 19, the academy director von Tiemann asked Tschichold to teach an evening class in script writing. Tschichold had become Tiemann’s star student and had a small studio at the academy.

During this time, much was being made of the work of Rudolf Koch from Offenbach. Jan Tschichold was impressed by Koch’s Maximilian Grotesk and visited the artist a number of times. Tshichold adopted Koch’s handwriting as a model for many of his designs of this time period. He spent endless hours in the library and book trade center in Leipzig. There he came into contact with the scripts of Simon-Pierre Fournier and many old script master books. He began to collect such materials. He regularly received design commissions for advertisements for the Leipzig trade fairs and between 1921 and 1925 wrote a number of such ads in calligraphic form.

At this time there were mostly robust or bold typefaces in use, regular weights were hardly used. Typefaces were mixed without much thought and good typographic quality was rarely found. Book artists had little knowledge of typography and applied even their own typefaces poorly. Even Emil Rudolf Weiß still corrected his sketches in millimeters and for more or less line spacing used the terms ‘a little lower’ or ‘a little higher’. Jan Tschichold examined these deficiencies and this was probably the beginning of his lifelong occupation with themes like the arrangement of typefaces, questions of the construction of a book title, etc.

Bodoni was just beginning to become popular and Tschichold’s interest for the setting and form of the typefaces grew. In 1923 he began the once unknown profession of a typographic designer and worked as such for Fischer & Wittig, a major book printer in Leipzig. An advertisement from this time is a remarkable document because it reveals evidence of Tschichold’s study of the scripts of Ludovico Arrighi and Tagliente.

more ... Influence of the Bauhaus 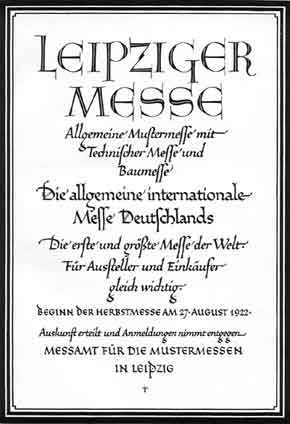 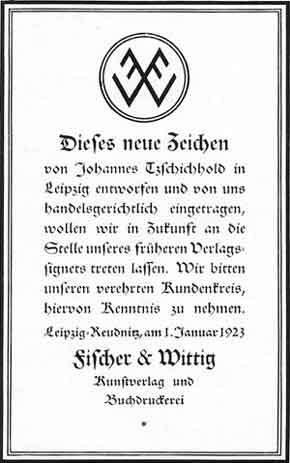