Walter Käch was born in June 1901. After an apprenticeship as a lithographer at Trüb Druck in Aarau he continued his education as a graphic designer at the Kunstgewerbeschule (School of Arts and Crafts) in Zürich. There he was taught by Fritz H. Ehmcke, Rudolf von Larisch and Anna Simons, who were all briefly members of the Zürich School staff and influenced him with their creative ideas about letterforms. Other important, though indirect, sources of influence were the Englishman Edward Johnston, who had taught Anna Simons, and Rudolf Koch, who was himself influenced by the Viennese Larisch.

At the Zürich School, Walter Käch taught type design for thirty years to classes of apprentices from all branches of the graphic industry, and also in preliminary classes. In addition, he designed posters for many exhibitions.

Under his instruction, we made rubbings on stiff paper from Roman inscriptions at the Museum, so as to be able to make exact measurements of proportions and stroke formation. Discovering the perfection of form and measure filled us with enthusiasm. Käch urged us to apply the knowledge we had gained to contemporary typefaces.

An important fact was the assumption, which grew into a certainty, that the Roman stonemasons had first traced out their Capitalis monumentalis on the stone with a broad brush. This was the only way in which the perfection of the swelling and diminishing of the curves could have been achieved. The slightly oblique positioning of the brush led to the rule of light upstrokes and heavy downstrokes, still followed today.

The Humanists (Dürer, Moyllus and others) tried to find geometrical principles of construction in the Capitals lettering of the ancient Romans. This may be an attractive theory but it is hardly the right approach to the matter. Freehand drawing and spontaneous forming have always been a precondition of the visual arts and nobody but a layman could believe that it would be otherwise in type design. Countless pages have been produced by freehand calligraphy, with rhythm and form created by aesthetic competence. Commenting on Walter Käch’s type design classes, Werner Wälchli wrote:

"For educational reasons, lettering with the broad-nibbed pen came before type drawing. In the few preliminary exercises which comprised elements of the first typeface, the correct penhold had to be observed and the vertical strokes had to show the required contrast with the horizontals. The pen was filled by means of a small stick in such a way that the underside of the tip remained blank, giving a sharp and cleanending (...)"

Type drawing, for Käch, was not the construction of type with T-square and compasses. A circle drawn with compasses was no letter O for him but a technical drawing. (...) We first had to draw the capital letters O, H and E with pencil on transparent paper. Drawing was by hand and eye, not with instruments, and corrections were made with a sharp scraping knife. The inner area first had to be completed before the outer boundaries of the letter were undertaken. The inner form made the letter as the interior space makes the jug. Completed letters were assembled into type images and in the final analysis it was the feeling for the right width that mattered. In this way, each pupil came to create his own alphabet. (...)

"Walter Käch was fascinated by Roman inscriptions. The build-up of these ‘capital’ letters provided the groundwork for the laws of sans-serif design."

I did not always hold the same views as Käch. His world was that of calligraphy and he sometimes expressed the opinion that punchcutters had "technicized" letterforms. One ground for disagreement was the concept of rhythm in a type line. I tried to show, with the aid of an enlargement of Nicolas Jensen’s roman, that the interior spaces (counters) of the lower-case letters had the identical width of the spaces between the letters, which was easy to demonstrate in a Latin text with its many straight strokes. It seemed to me that Jenson, like Gutenberg, had taken the grid pattern of black letter as the basic structure. Käch disagreed. Later on, I designed all my serif faces in accordance with this concept in order to avoid unevenness in the flow of reading.

Walter Käch’s work signifies a completely new point of departure for modern type design. With his intensive study of Roman Capitals and the calligraphic development of minuscule letters, he created the basis upon which sanserif faces, the leading typeface category of the 20th century, could be further developed.

After its hesitant introduction in the 19th century, it was thanks to the efforts of the Bauhaus that sanserif became an expression of modernism, which marked it out for decades. A new chapter in the history of sans then began in the Fifties.


The deep-seated humanity of Walter Käch as a man was one of the reasons why typographers like Emil Ruder on the one hand and typeface designers like myself on the other had the chance to learn the basics in his classes and build new ideas on them.

Variations of stroke thickness gave the letters the familiar appearance of a roman. The basic characteristics of Univers were established with Käch. 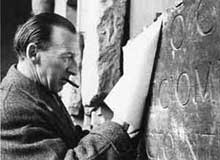 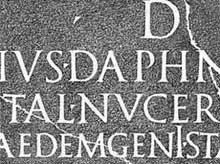 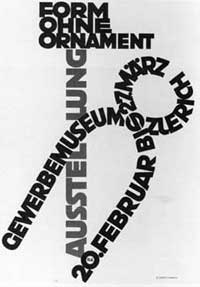 Poster by Walter Käch, 1927 (!)
The most important fonts of Adrian Frutiger in the Linotype Library:
Categories