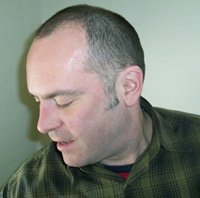 Stephen Boss
Stephen Boss was born on April 8th 1969 in the Detroit area.
Always interested in letterforms, in his youth he used brushes and calligraphy pens, eventually switching to a mouse and bezier points. Now he designs with a mixture of hand drawing, and mouse clicks.
Stephen’s Type Rendering instructor was Richard Isbell, a Type Designer from the era when headlines and logotypes were still hand rendered.
He started Emboss Fonts in 1995 with an interest in developing typefaces with a unique vernacular. He has since consulted on type & design projects for a major American Publishing house, banks and clothing companies.
His work was exhibited in Seybold’s New Type Gallery, a traveling show which originated in the Javitz Center, NYC; moved on to ATypI in Reading UK, the Royal Academy of Art in the Hague and lastly Harvard in Cambridge Massachusetts where it is stored. His work was featured in Japan’s Timing Zero, Publish Magazine, and Mass HiTech.
He lives in the Fingerlakes region of Upstate New York, and always has a few new designs in queue.
The Know How section offers detailed background knowledge to deal with all enquiries about the use of fonts.