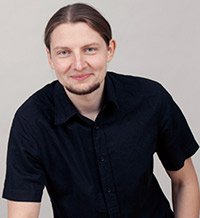 Felix Bonge
The font designer Felix Bonge was born in Hamburg in 1982. He finished studying Communication Design in the Department of Design at the University of Applied Sciences Hamburg (HAW). He is still there today, working as a lecturer in the Faculty of Design, Media and Information (DMI), as well as in the design studio allerzeiten along with his colleagues Tim Heesen and Dennis Hinz.

Felix Bonge on his first font family Levato, the design process and the subject of font design.

Are there things that you particularly want the graphic design community to know about Levato?
The Levato Family contains five weights from light to black, plus matching italics and many OpenType features, including small caps, four different figure styles, a vast range of ligatures, discretionary ligatures, swashes and even swashligatures, alternate characters, fractions, super- and subscript. That makes Levato a versatile typeface, suitable for serious book titles as well as playful magazine layouts.

Finally Levato took over control and I just did what it demanded ...
What was the process for creating the design?
I would like to say that it was a straight-lined, well-thought-out process, but to be honest, it was the opposite. Actually Levato was my first „real“ typeface and I had to learn everything in a hands-on manner. My internship at Elsner+Flake and my university classes had layed the foundation, but in the end I had to do the work on my own. I drew the first sketches with a pencil on paper but most of the work took place directly in Fontlab Studio. New characters, like the swashes, I sketched very loosely on paper, 1–2 cm in height, just to get a feel for the shape. The actual drawing was done on screen.
In the first place Levato started out to be a personal study in contrast and proportion, I never intended to do a type-family. But over time it grew into a semester project and from there on I worked at it every semester apart from my other classes. At that time I was pretty new to the world of typography and everything I learned about the vast arsenal of typographic expression, I incorporated into my own font. That way I learned about smallcaps, swashletters, ligatures etc. and at the same time the glyph-count rose to a sizable amount. Finally Levato took over control and I just did what it demanded.
It took me almost four years, a myriad of changes, adaptions and fresh starts to finish my work and be satisfied with it. Though without my professor, Jovica Veljović, the design would have ended as a personal study, as it was intended to be. He always pushed me one step further and I am deeply grateful for that, as well as his advice and guidance along the way.

Is there one aspect of the design process that was particularly difficult or rewarding?
When I had worked on the italic for one semester, I took part in the calligraphy class, also of Prof. Veljović. And that was an absolute turning point.
Afterwards I completely reworked the font, especially the italic. I wish I would have done it earlier. It has done a lot for my approach to typedesign and understanding of letterforms in general.

Are there aspects of the design that you are especially pleased with?
In retrospect I would mention the overall harmony of the design and the organic strokes. Moreover I like the tension between serious, almost rigid shapes on the one hand and playful, naïve letters on the other hand that lend the design a special character.

Are there aspects of the design that you think should be highlighted?
Its versatility most of all. The range from classic to playful expression, by means of all the OpenType-features.
The Know How section offers detailed background knowledge to deal with all enquiries about the use of fonts.