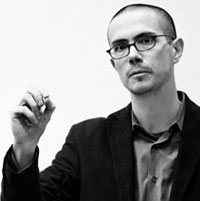 Cyrus Highsmith
In 1997 Cyrus Highsmith graduated with honors from Rhode Island School of Design and joined the Font Bureau. As Senior Designer, he concentrates on development of new type series. A faculty member at RISD, he teaches typography in the department of Graphic Design. He lectures and gives workshops across the United States, Mexico and Europe. In 2001, Cyrus Highsmith was featured in Print Magazine’s New Visual Artist Review. His typefaces Prensa and Relay were among the winners at Bukva:Raz!, the international type design competition. He has exhibited his work in the United States and Europe.
Martha Stewart Living, The Source, MensHealth, the Spanish edition of Playboy, Rolling Stone, The Montreal Gazette (Canada), and The Sunday Independent (London) have featured his faces. He has designed types for La Prensa Grafica (El Salvador) and El Universal (Mexico City). In 2002 he produced new headline series for The Wall Street Journal that satisfied complex contemporary requirements while remaining within the traditional typographic character that distinguishes the Journal.
The wide range of his work is important to Highsmith. He considers himself above all a draftsman. Drawing is his lifelong passion. He combines an energetic illustrative approach with enthusiasm for typographic communication, leading to a diverse library of original designs. Highsmith draws a calligraphic script for a wedding invitation as comfortably as an industrial strength sanserif.
The Know How section offers detailed background knowledge to deal with all enquiries about the use of fonts.