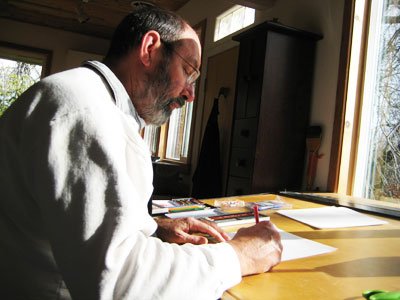 How many typefaces have you developed until now?
Over 180.

Is type design what you are mainly doing? What is your profession aside from type design?
Type design is my primary activity. I am also an author and a teacher.

What inspired you to design Magma II?
I had already designed a sans serif typeface, Stone Sans (ITC) that was very successful, but I wanted to try designing a typeface that was highly legible for text and also attractive when used for display. To this end I wanted to create a monoline design that had strokes which swelled slightly at the endings. I also wanted to create an expanded sans serif family that included an uncial design, Munc, and a different approach to an informal than I had taken with the Stone family. That resulted in Tuff. As I was engaged in studying the early forms of the Roman letter I decided to use the basic components of Magma II to make a typeface based on the archaic Roman forms.

Were you influenced by other typefaces in the design of Magma II?
There were three influences – Hunter Middleton’s Stellar, Hermann Zapf’s Optima, and perhaps most importantly Hans Eduard Meier’s Syntax. I was also influenced by some ancient Greek inscriptions.

What techniques did you use in creating Magma II and what was the process for creating the design?
I made careful pencil drawings of most of the characters on frosted mylar. I then scanned these drawings and digitized them using standard applications. There was a good deal of editing on-screen, especially for the heavier and lighter weights.

Are there aspects of the design that you think should be highlighted, or that you particularly want the graphic design community to know about your typeface?
The high legibility both for print and on-screen is an important aspect, particularly for anyone designing documents that will be used for both media. It also can be mixed character for character with Munc, which makes it particularly attractive for creating logotypes and mastheads.

For what applications would you recommend Magma II (poster, text, newspapers, advertisements etc.)?
Magma II is an all purpose typeface. It is particularly suited to applications such as books and magazines which contain a good deal of text. It also has an appealing look at large size, so it can be used for advertising as well.

What was the reason for you to give the typeface its name and what is the meaning?
Several of my typefaces have been plays on the meaning of my last name – Stone. This is one of them.
The Know How section offers detailed background knowledge to deal with all enquiries about the use of fonts.