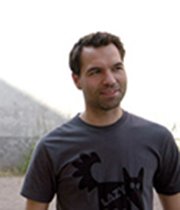 Hannes von Döhren
Hannes von Döhren was born in Berlin/Germany in 1979. After completing his studies (graphic design) in 2005, he worked in an advertising agency in Hamburg/Germany. Since 2007 he has been working as a freelancing graphic designer in Berlin, which allows him to spend some of his time developing fonts as well.
Linotype released Quench® in 2008, the first of Hannes von Döhren’s typefaces in the Linotype library. In 2009, he added Opal™ and Snoogle™ (Snoogle was designed in collaboration with Raimo Böse) as well as Klint™ and ITC Chino™ (ITC Chino was designed in collaboration with Livius Dietzel).

The website of Hannes von Döhren:
http://www.hvdfonts.de
The Know How section offers detailed background knowledge to deal with all enquiries about the use of fonts.