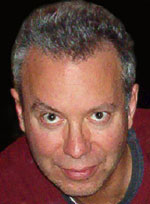 Leslie Cabarga has been drawing pictures and pictures of letters all his life. In his own words – “Drawing requires an inherent feel for anatomy and proportion. Lettering does also, as I believe that our ancient letterforms are based upon human proportions. Inspired at first by comic book lettering, I began copying logos and display type out of magazines. At fifteen I stripped up film negatives to form a crude but serviceable typositor font.
Working under the name ‘Handy Lettering Co.’ for many years I designed hand lettering for advertising clients, while also working full time as Leslie Cabarga, illustrator. But drawing illustrations has always seemed difficult. Lettering is easy and fun. It’s an adventure with less angst involved. Working for the last five years on the Macintosh has enabled me to create computer fonts, which in many ways is the most satisfying thing I do.
Typing a letter or manuscript with a font I’ve created makes me feel like God. I’m part historian, part preacher and part teacher. The fonts I’m designing usually start with some historical fragments. My interest in developing and refining these for current use is in initiating the unenlightened about great lost alphabets, and spreading the gospel of type design. With my background in hand lettering I differ from many pure type designers. The computer has blurred the line between type and lettering allowing type to become less conservative, less boringly regular, and to allow many idiosyncracies of lettering.
With my font BadTyp, I spent years collecting the worst examples of lettering and created a font designed to teach people to recognize the most common lettering mistakes. There is only one basic error in font design and that’s inconsistency.”
The Know How section offers detailed background knowledge to deal with all enquiries about the use of fonts.