In Layout in Advertising, published in October 1928, W. A. Dwiggins pointedly left sans serifs out of his survey of advertising typefaces. Gothic the newspaper standby in its various manifestations has little to commend it, he wrote, except simplicity; it is not overly legible, it has no grace. Gothic capitals are indispensable, but there are no good Gothic capitals. The typefounders will do a service to advertising if they will provide a Gothic of good design. In February 1929, Harry Gage, Assistant Director of Linotype Typography at Mergenthaler Linotype, challenged Dwiggins to design a good sans serif for the firm. Mergenthaler was eager to have a type that could compete with the new wave of European sans serifs specifically Futura®, but also Kabel™ and Gill Sans™ – that had been released recently. Finding these types “fine in the capitals and bum in the lower-case,” Dwiggins agreed to try his hand at a new sans Mergenthaler’s decision to hire Dwiggins marked the first time the company had turned to an outside designer. It also marked the first time that Dwiggins had attempted a typeface. 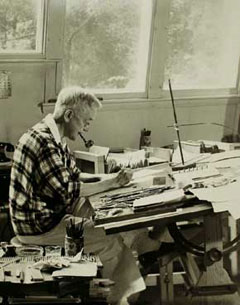 William Addison Dwiggins in his studio late 1930s.
Photograph by Robert Yamall Richie.
This font feature is an article from Linotype Matrix magazine Vol. 4 No. 2.
Author: Paul Shaw. We would like to thank Roberta Zonghi, Keeper, Rare Books and Manuscripts Department, Boston Public Library for permission to reproduce photographs of items in the 1974 and 2001 Dwiggins Collections. All photos, except those credited, were taken by Paul Shaw.
Categories