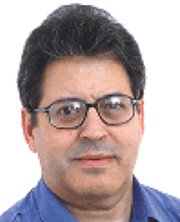 Franko Luin
Franko Luin was born on April 6, 1941 in Trieste, Italy. In 1961, he moved to Sweden and died on September 15, 2005 in Tyresö. After studying at the Grafiska Institut in the 1960s, he worked as a designer for Ericsson for two decades. After this, he became independent and formed his own studio, Omnibus Typografi, in 1996.